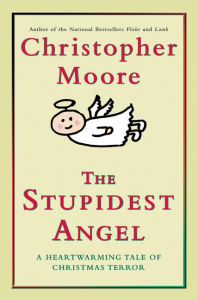 Christmas crept into Pine Cove like a creeping Christmas thing: dragging garland, ribbon, and sleigh bells, oozing eggnog, reeking of pine, and threatening festive doom like a cold sore under the mistletoe.

Pine Cove, her pseudo-Tudor architecture all tarted up in holiday quaintage — twinkle lights in all the trees along Cypress Street, fake snow blown into the corner of every shop’s windows, miniature Santas and giant candles hovering illuminated beneath every streetlight — opened to the droves of tourists from Los Angeles, San Francisco, and the Central Valley searching for a truly meaningful moment of Christmas commerce. Pine Cove, sleepy California coastal village — a toy town, really, with more art galleries than gas stations, more wine-tasting rooms than hardware stores — lay there, as inviting as a drunken prom queen, as Christmas loomed, only five days away. Christmas was coming, and with Christmas this year, would come the Child. Both were vast and irresistible, and miraculous. Pine Cove was expecting only one of the two.

Which is not to say that the locals didn’t get into the Christmas spirit. The two weeks before and after Christmas provided a welcome wave of cash into the town’s coffers, tourist-starved since summer. Every waitress dusted off her Santa hat and clip-on reindeer antlers and checked to make sure that there were four good pens in her apron. Hotel clerks steeled themselves for the rage of last-minute overbookings, while housekeepers switched from their normal putrid baby-powder air fresheners to a more festive putrid pine and cinnamon. Down at the Pine Cove Boutique they put a “Holiday Special” sign on the hideous reindeer sweater and marked it up for the tenth consecutive year. The Elks,Moose, Masons, and VFWs, who were basically the same bunch of drunk old guys, planned furiously for their annual Christmas parade down Cypress Street, the theme of which this year would be Patriotism in the Bed of a Pickup (mainly because that had been the theme of their Fourth of July parade and everyone still had the decorations). Many Pine Covers even volunteered to man the Salvation Army kettles down in front of the post office and the Thrifty-Mart in two-hour shifts, sixteen hours a day. Dressed in their red suits and fake beards, they rang their bells like they were going for dog-spit gold at the Pavlov Olympics.

“Give up the cash, you cheap son of a bitch,” said Lena Marquez, who was working the kettle that Monday, five days before Christmas. Lena was following Dale Pearson, Pine Cove’s evil developer, through the parking lot, ringing the bejeezus out of him as he headed for his truck. On his way into the Thrifty-Mart, he’d nodded to her and said, “Catch you on the way out,” but when he emerged eight minutes later, carrying a sack of groceries and a bag of ice, he blew by her kettle like she was using it to render tallow from building inspectors’ butts and he needed to escape the stench.

“It’s not like you can’t afford a couple of bucks for the less fortunate.”

She rang her bell especially hard right by his ear and he spun around, swinging the bag of ice at her about hip level.

Lena jumped back. She was thirty-eight, lean, darkskinned, with the delicate neck and finely set jawline of a flamenco dancer; her long black hair was coiled into two Princess Leia cinnabuns on either side of her Santa hat. “You can’t take a swing at Santa! That’s wrong in so many ways that I don’t have time to enumerate them.”

“You mean to count them,” Dale said, the soft winter sunlight glinting off a new set of veneers he’d just had installed on his front teeth. He was fifty-two, almost completely bald, and had strong carpenter’s shoulders that were still wide and square, despite the beer gut hanging below.

“I mean it’s wrong — you’re wrong — and you’re cheap,” and with that Lena put the bell next to his ear again and shook it like a red-suited terrier shaking the life out of a screaming brass rat.

Dale cringed at the sound and swung the ten-pound bag of ice in a great underhanded arc that caught Lena in the solar plexus and sent her backpedaling across the parking lot, gasping for breath. That’s when the ladies at BULGES called the cops — well, cop.

BULGES was a women’s fitness center located just above the parking lot of the Thrifty-Mart, and from their treadmills and stair-climbing machines, the BULGES members could watch the ins and outs of the local market without feeling as if they were actively spying. So what had started as a moment of sheer glee and a mild adrenaline surge for the six of them who were watching as Lena chased Dale through the parking lot, turned quickly to shock as the evil developer thwacked the Latin Santa-ette in the breadbasket with a satchel of minicubes. Five of the six merely missed a step or gasped, but Georgia Bauman — who had her treadmill cranked up to eight miles per hour at that very moment, because she was trying to lose fifteen pounds by Christmas and fit into a red-sequined sheath cocktail dress her husband had bought for her in a fit of sexual idealism — bowled backward off her treadmill and landed in a colorful spandex tangle of yoga students who had been practicing on the mats behind her.

“Did you see that? He nearly knocked her off her feet. Poor thing.”

“Should we see if she’s all right?”

“Someone should call Theo.”

The exercisers opened their cell phones in unison, like the Jets flicking switchblades as they gaily danced into a West Side Story gang-fight to the death . . .

The foregoing is excerpted from The Stupidest Angel 2.0 by Christopher Moore. All rights reserved. No part of this book may be used or reproduced without written permission from HarperCollins Publishers, 10 East 53rd Street, New York, NY 10022