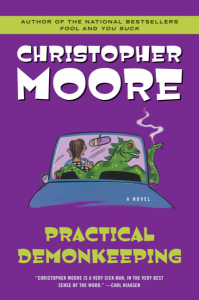 The Breeze blew into San Junipero in the shotgun seat of Billy Winstons Pinto wagon. The Pinto lurched dangerously from shoulder to centerline, the result of Billy trying to roll a joint one-handed while balancing a Coors tallboy and bopping to the Bob Marley song that crackled through the stereo.

“We be jammin now, mon!” Billy said, toasting The Breeze with a slosh of the Coors.

The Breeze shook his head balefully. “Keep the can down, watch the road, let me roll the doobie,” he said.

“Sorry, Breeze,” Billy said. “Im just stoked that were on the road. “

Billy’s admiration for The Breeze was boundless. The Breeze was truly cool, a party renaissance man. He spent his days at the beach and his nights in a cloud of sinsemilla. The Breeze could smoke all night, polish off a bottle of tequila, maintain well enough to drive the forty miles back to Pine Cove without arousing the suspicion of a single cop, and be on the beach by nine the next morning acting as if the term hangover were too abstract to be considered. On Billy Winstons private fist of personal heroes The Breeze ranked second only to David Bowie.

The Breeze twisted the joint, fit it, and handed it to Billy for the first hit.

“What are we celebrating?” Billy croaked, trying to hold in the smoke.

The Breeze held up a finger to mark the question, while he dug the
Dionysian Book of Days: An Occasion for Every Party from the pocket of his Hawaiian shirt. He flipped through the pages until he found the correct date. “Nambian Independence Day, ” he announced.

“It says,” The Breeze continued, “that the Nambians celebrate their independence by roasting and eating a whole giraffe and drinking a mixture of fermented guava juice and the extract of certain tree frogs that are thought to have magical powers. At the height of the celebration, all the boys who have come of age are circumcised with a sharp stone.”

“Maybe we can circumcise a few Techies tonight if it gets boring,” Billy said.

Techies was the term The Breeze used to refer to the male students of San Junipero Technical College. For the most part, they were ultraconservative, crew-cut youths who were perfectly satisfied with their role as bulk stock to be turned into tools for industrial America by the rigid curricular lathe of San Junipero Tech.

To The Breeze, the Techies’ way of thinking was so foreign that he couldnt even muster a healthy loathing for them. They were simply nonentities. On the other hand, the coeds of S.J. Tech occupied a special place in The Breezes heart. In fact, finding a few moments of blissful escape between the legs of a nubile coed was the only reason he was subjecting himself to a forty-mile sojourn in the company of Billy Winston.

Billy Winston was tall, painfully thin, ugly, smelled bad, and had a particular talent for saying the wrong thing in almost any situation. On top of it all, The Breeze suspected that Billy was gay.

The idea had been reinforced one night when he dropped in on Billy at his job as night desk clerk at the Rooms-R-Us motel and found him leafing through a
Playgirl magazine. In Breeze’s business one got used to running across the skeletons in peoples closets. If Billy’s skeleton wore womens underwear, it didnt really matter. Homosexuality on Billy Winston was like acne on a leper.

The up side of Billy Winston was that he had a car that ran and would take The Breeze anywhere he wanted to go. The Breeze’s van was currently being held by some Big Sur growers as collateral against the forty pounds of sinsemilla buds he had stashed in a suitcase at his trailer.

“The way I see it,” said Billy, “we hit the Mad Bull first. Do a pitcher of margaritas at Jose’s, dance a little at the Nuked Whale, and if we dont find any nookie, we head back home for a nightcap at the Slug. “

The Nuked Whale was San Junipero’s premier college dance club. If The Breeze was going to find a coed to cuddle, it would be at the Whale. He had no intention of making the drive with Billy back to Pine Cove for a nightcap at the Head of the Slug. Closing up the Slug was tantamount to having a losing night, and The Breeze was through with being a loser. Tomorrow when he sold the forty pounds of grass he would pocket twenty grand. After twenty years blowing up and down the coast, living on nickle-dime deals to make rent, The Breeze was, at last, stepping into the winners circle, and there was no room for a loser like Billy Winston.

Billy parked the Pinto in a yellow zone a block away from the Nuked Whale. From the sidewalk they could hear the throbbing rhythms of the latest techno-pop dance music.

The unlikely pair covered the block in a few seconds, Billy striding ahead while The Breeze brought up the rear with a laid-back shuffle. As Billy slipped under the neon whale tail and into the club, the doorman-a fresh-faced slab of muscle and crew cut-caught him by the arm.

Billy flashed an expired drivers license as Breeze caught up to him and began digging into the pocket of his Day-Glo green surf shorts for his wallet.

The doorman raised a hand in dismissal. “That’s okay, buddy, with that hairline you dont need any.”

The Breeze ran his hand over his forehead self-consciously. Last month he had turned forty, a dubious achievement for a man who had once vowed never to trust anyone over thirty.

Billy reached around him and slapped two dollar bills into the doorman’s hand. “Here,” he said, “buy yourself a night with an Inflate-A-Date. “

“What!” The doorman vaulted off his stool and puffed himself up for combat, but Billy had already scampered away into the crowded club. The Breeze stepped in front of the doorman and raised his hands in surrender.

“Cut him some slack, man. Hes got problems.”

“He’s going to have some problems,” the doorman bristled.

“No, really, ” The Breeze continued, wishing that Billy had spared him the loyal gesture and therefore the responsibility of pacifying this collegiate cave man. “Hes on medication. Psychological problems.”

The doorman was unsure. “If this guy is dangerous, get him out of here.”

“Oh,” the doorman said, as if it had all become clear. “Well, keep him in line or you’re both out.”

“No problem.” The Breeze turned and joined Billy at the bar amid a crunch of beer-drinking students. Billy handed him a Heineken.

Billy said, “What did you say to that asshole to calm him down?”

“I told him you wanted to fuck your mom and kill your dad.”

“No charge.” The Breeze tipped his beer in salute.

Things were not going well for him. Somehow he had been snared into this male-bonding bullshit with Billy Winston, when all he wanted to do was ditch him and get laid.

The foregoing is excerpted from Practical Demonkeeping by Christopher Moore. All rights reserved. No part of this book may be used or reproduced without written permission from HarperCollins Publishers, 10 East 53rd Street, New York, NY 10022