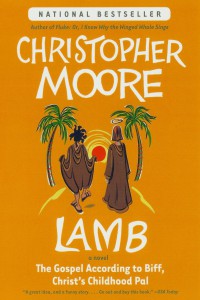 When I began writing the comic version of the gospels, I took a sort of Hippocratic oath to myself- that is: First, do no harm. I wanted to do this book without attacking anyones faith, and without questioning the spiritual precepts of Christs identity as set down in the New Testament. As far as LAMB would be concerned, Jesus was who the Bible says he was, so I had to color within those lines. To do otherwise would have been mean-spirited, which is the only thing I feel is off limits for humorous exploration. But all that came later. First I had to decide to tell this story, and it came to me this way…

I’m reading a novel called The Master and Margarita, by Mikhail Bulgakov. I come across this section which is the trial of Jesus as told from the point of view of Pontius Pilate, and I find that I’m completely sucked in by the humanity of the characters. And I’m wondering why, after hearing this story all my life, I’m suddenly affected by it, and I realize that it is, indeed, the point of view.

So a couple of months pass, and I’m thinking about the story of Jesus, and PBS Frontline does this series called From Jesus to Christ, by which I am informed that except for one incident in the gospel of Luke, the Bible basically ignores nearly thirty years of Christs life. And I say, “Hey, someone should write that part.” So I set out trying to learn what I can about Israel in the first century, and all the time Im thinking, “I need a witness. I need a point of view.” I needed a guy who witnessed the missing years. I needed a guy who didn’t view Jesus so much as a savior, but as a person. A guy who was so obnoxious that he was purposely edited out of the New Testament. I needed Christs best friend — Biff.

Imagine that you’re a very average kid, but your best friend happens to be the best athlete in town, the captain of all the teams, the best looking, the most popular, the smartest, and you are basically trying to find your own identity while being eclipsed by your friends presence. Pretty tough, huh? You’d have to be resilient, you’d have to have a sense of humility, in fact, you really couldn’t be a good friend to this guy if you were impressed by his talents. This was the process I went through in creating Levi who is called Biff, the narrator of LAMB.

Biff is a good guy, hes fiercely loyal to his best pal Joshua bar Joseph (Jesus), hes just not all that impressed. The way he deals with the ego-crush of hanging out with the Son of God is by developing a wicked sense of humor (even to the point of inventing sarcasm). Hes the perfect guy to give an ironic spin to the greatest story ever told.

Once I had my narrator, it was all about research, about creating the world of first century Israel as accurately as I could, while exploiting the holes in history so I could tell the tale. The first part of the book takes place in Galilee, putting Biff and Josh in the midst of a very Tom Sawyer-style mystery (and I did model the mystery on that august Twain tome more than a little). The middle section takes the boys to the Orient in search of the three wise men who were present at Joshua’s birth. This becomes, essentially, a log of Joshua’s search for how to become the man who would save the world. He learns the spiritual disciplines of Taoism, Confucianism, Buddhism, and Hinduism, while his best pal Biff concentrates on chasing girls and learning the finer points of the Kama Sutra from an string of harlots. (I like to think of this section as Josh and Biff’s Excellent Adventure) LAMB finishes up with a behind-the-scenes view of Joshua’s ministry and the events that transformed a poor kid from Galilee into the most influential human being ever to walk the Earth. (Think Butch and Sundance do Jerusalem.)

For me, LAMB started out as a further exploration of the phenomenon of faith and the responsibility of a messiah that I touched on in Coyote Blue and Island of the Sequined Love Nun, but it ended up being an exploration of the true meaning of sacrifice, loyalty, and friendship.