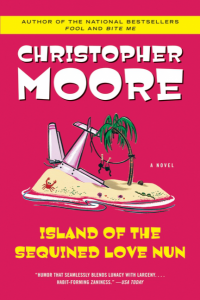 Take a wonderfully crazed excursion into the demented heart of a tropical paradise — a world of cargo cults, cannibals mad scientists, ninjas, and talking fruit bats.

Our bumbling hero is Tucker Case, a hopeless geek trapped in a cool guys body, who makes a living as a pilot for the Mary Jean Cosmetics Corporation. But when he demolishes his bosss pink plane during a drunken airborne liaison, Tuck must run for his life from Mary Jeans goons. Now theres only one employment opportunity left for him: piloting shady secret missions for an unscrupulous medical missionary and a sexy blond High Priestess on the remotest of Micronesian hells.

Here is a brazen, ingenious, irreverent, wickedly funny novel from a modern master of the outrageous.