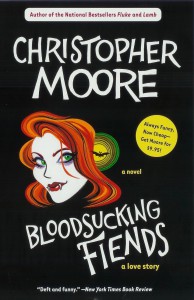 Sundown painted purple across the great Pyramid while the Emperor enjoyed a steaming whiz against a dumpster in the alley below. A low fog worked its way up from the bay, snaked around columns and over concrete lions to wash against the towers where the Wests’ money was moved. The financial district: an hour ago it ran with rivers of men in gray wool and women in heels; now the streets, built on sunken ships and gold-rush garbage, were deserted quiet except for a foghorn that lowed across the bay like a lonesome cow.

The Emperor shook his scepter to clear the last few drops, shivered, then zipped up and turned to the royal hounds who waited at his heels. &#19;The foghorn sounds especially sad this evening, don’t you think?”

The smaller of the dogs, a Boston terrier, dipped his head and licked his chops.

&#19;Bummer, you are so simple. My city is decaying before your eyes. The air is thick with poison, the children are shooting each other in the street, and now this plague, this horrible plague is killing my people by the thousands, and all you think about is food.”

The Emperor nodded to the larger dog, a golden retriever.

“Lazarus knows the weight of our responsibility. Does one have to die to find dignity? I wonder.”

Lazarus lowered his ears and growled.

“Have I offended you, my friend?”

Bummer began growling and backing away from the dumpster. The Emperor turned to see the lid of the dumpster being slowly lifted by a pale hand. Bummer barked a warning. A figure stood up in the dumpster, his hair dark and wild and speckled with trash, skin white as bone. He vaulted out of the dumpster and hissed at the little dog, showing long white fangs. Bummer yelped and cowered behind the Emperor’s leg.

“That will be quite enough of that,” the Emperor commanded, puffing himself up and tucking his thumbs under the lapels of his worn overcoat.

The vampire brushed a bit of rotted lettuce from his black shirt and grinned. “I’II let you live,” he said, his voice like a file on ancient rusted metal. That’s your punishment.”

The Emperor’s eyes went wide with terror, but he held his ground. The vampire laughed, then turned and walked away.

The Emperor felt a chill run up his neck as the vampire disappeared into the fog. He hung his head and thought, Not this. My city is dying of poison and plague and now this — this creature — stalks the streets. The responsibility is suffocating. Emperor or not, I am only a man. I am weak as water: an entire empire to save and right now I would sell my soul for a bucket of the Colonels crispy-fried chicken. Ah, but I must be strong for the troops. It could be worse, I suppose. I could be the Emperor of Oakland.

&#19;Chins up, boys,” the Emperor said to his hounds. “If we are to battle this monster, we will need our strength. There is a bakery in North Beach that will presently be dumping the day-old. Let’s be off.” He shuffled away thinking, Nero fiddled while his empire went to ashes; I shall eat leathery pastries.

The foregoing is excerpted from Bloodsucking Fiends by Christopher Moore. All rights reserved. No part of this book may be used or reproduced without written permission from HarperCollins Publishers, 10 East 53rd Street, New York, NY 10022